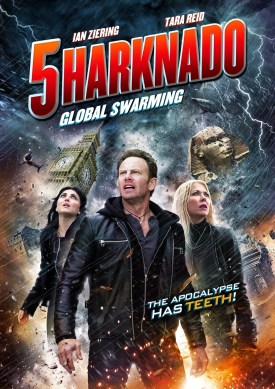 Watch this if you liked:
Sharknado 1-4, Zombeavers, Sharktopus

While North America picks up the pieces after several sharknado incidents, Fin Shepard and his family travel to London where they unleash a new kind of sharknado.

From ripping off the Indiana Jones series to ripping off the Back to the Future series and everything in between, Sharknado 5: Global Swarming is full of cheesy dialogue, terrible acting, worse special effects and loads of fun.

Like its predecessors, Sharknado 5 is ridiculous, ludacris and more entertaining than many Oscar nominated films have been over the years. Ian Ziering and Tara Reid both bring their unique talents to the screen and ham it up well.

I must admit, I’ve not always been able to identify the US news anchors featured in previous Sharknado films. So I did get a little bit over-excited to see Australian hosts Lisa Wilkinson and Karl Stefanovic.

There was one part of Sharknado 5 that I found disappointing and that was its ending. The last cameo was great, the twist was enjoyably silly, but the ending was frustrating.

Overall, the Sharknado films keep trying to one up each other and Sharknado 5: Global Swarming definitely upped the ante in terms of the absurd. While you don’t need to have seen Sharknado 1-4 to enjoy the fifth, it will certainly help. Sharknado 5 is a great addition to a truly awful (delightful) film series.

“Sharks. Why does it always gotta be sharks?”