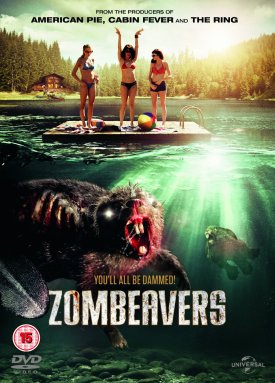 Tagline:
You’ll all be dammed!

Watch this if you liked:
Lake Placid 2-4, Piranha 3D, Cabin in the Woods

Six teenagers head to a cabin in the woods for a weekend of debauchery. However, their plans are disrupted when they find themselves under attack from a horde of zombie beavers.

I loved this movie so much. The opening credits that are a fun cross between Pink Panther and Scooby Doo. The beaver puppets both pre- and post-zombification. The chuckle worthy credits and after credits sequence. From start to finish Zombeavers is a very funny horror film.

I thought I had everything worked out early in the film. Boy, was I wrong. Zombeavers has some great twists along the way and was not at all what I expected. No spoilers.

Zombeavers is a high quality b-grade horror movie. The acting was among the best I have seen in similar films. Yes, there are some dubious special effects, including the most fake disembodied foot I have ever seen, and the beaver puppets don’t even seem to be trying for realism. However by doing this, Zombeavers doesn’t take itself too seriously and the result is thoroughly enjoyable. The Zombeavers crew know their target audience.

Make sure to stay (or fast forward) to the very end of the film. There is a blooper reel, some crazy credits and a post credits sequence.

Action movie fans, keep an ear out for a play on a popular Die Hard quote. No, not that one, the other one. No, no, the other other one. Ah, you’ll know it when you hear it.

Zombeavers is a film about zombie beavers so as long as you bring a sense of humour, abandon your sense of disbelief and don’t take things to seriously, you can expect a dam good time.

“We cannot turn against each other right now. That’s exactly what the beavers would want.”