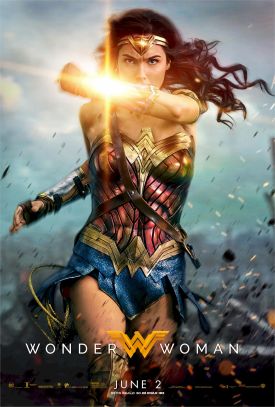 Watch this if you liked:
Man of Steel, Batman v Superman: Dawn of Justice, Suicide Squad

After saving pilot and spy Steve Trevor from drowning and German soldiers, Princess Diana of Themiscyra embarks on a journey that takes her from the secluded home she has always known to save humanity from the hell of World War I.

Wonder Woman is, in a word, wonderful.

The story fits well into the DC extended universe started by Man of Steel, Batman v Superman and Suicide Squad. Set in both the present and the past, Wonder Woman could easily have been clunky or poorly executed, but it is neither. The flow of the story is seamless from the introduction, middle and end.

Gal Gadot is perfect as Wonder Woman. When Gadot had an almost cameo appearance in Batman v Superman, I was impressed and looked forward to seeing more from her. This has paid off with a significant amount of interest. Gadot manages to embody the fierceness, strength, naivety and idealism of the character.

Chris Pine gives a fantastic portrayal of Steve Trevor. I love that they made his character quite funny but didn’t make him overwhelming or a fool. It’s often a difficult line to walk and it has been executed with skill.

The rest of the cast perform their roles very well. Lucy Davis remarkably so, as another form of comic relief that is more overt than Steve Trevor but seen less frequently.

The sets for Wonder Woman are breathtaking. Sign me up for the next cruise to Themyscira because Wonder Woman shows it as an island of beauty and radiance. Just as it should be. Even murky sets, such as the trenches of the war front, look excellent and do a great job of setting the right mood.

The score for Wonder Woman isn’t overpowering to the story but when the music kicks in at the right moment, it is magnificent.

I cannot recommend Wonder Woman enough as a great introduction to one of DC’s oldest characters for new fans, viewers who already know and love Wonder Woman or people who just enjoy great superhero films.

“My mother sculpted me from clay and I was brought to life by Zeus.”
“Well, that’s neat.”