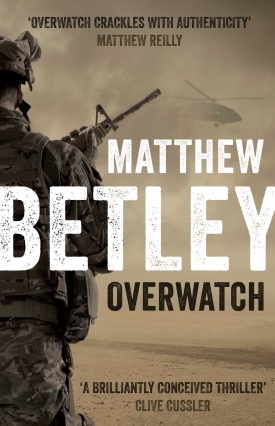 Former Marine and current alcoholic Logan West has had his fair share of hangovers. Though none quite compare to awakening hungover to an intruder with connections to a group bent on starting World War III. Logan must work with former teammates and unlikely allies if he is to stop the shadows of his past from darkening everyone’s future.

Overwatch is a thoroughly enjoyable addition to the action thriller genre.

Logan West is everything you want from an action hero. He’s flawed, ferocious and almost unstoppable with a generous helping of good luck and great allies. There are even a handful of zingers thrown out by the hero, just to cover all of the bases.

Overwatch’s plot is busy but not in a way that makes the story hard to follow. Overwatch sticks fairly closely to the action formula, but this isn’t necessarily a bad thing — if it’s not broken, why fix it?

Billed as a “Logan West thriller”, Overwatch is the start of a series featuring the hero. I definitely look forward to future novels to see how the characters and their stories evolve.

While Overwatch doesn’t break a lot of new ground, the story is enjoyable, the heroes are likeable and the bad guy is despicable. A solid read for anyone who enjoys fast paced military action thrillers.