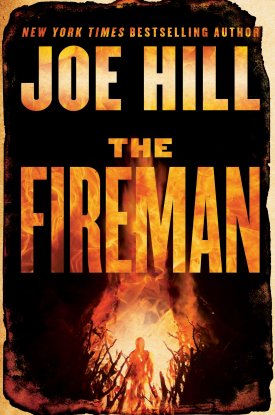 Page count:
752 [including credits and acknowledgements]

A deadly spore has infected most of the planet’s population causing them to spontaneously combust. When Harper Willowes becomes infected, she is happily married and working as a volunteer nurse around the clock to ease the suffering of those afflicted with Draco incendia trychophyton.

When the tell-tale black and gold markings appear, confirming that she has contracted the disease, Harper’s world turns upside-down. She discovers that she is also pregnant and that her husband isn’t the man she thought he was.

Harper flees her home and is rescued by John Rookwood, AKA The Fireman. John takes Harper back to a secluded camp where people with Draco incendia trychophyton hide from the extermination crews and learn to coexist with the spore that inhabits their bodies. But can a new community coexist with each other over the long term or will the camp erupt while the rest of the world burns?

The Fireman is a well-written science fiction story with elements of horror. The plot has notes of familiarity but manages to rock out with its own melody.

Joe Hill’s writing is punchy and moves the story along well. In a book as long as The Fireman (both in pages and time covered) there’s not a lot of room for fluff. Hill manages to build a world and show us characters that feel genuine — even when they are shooting fireballs.

I came to adore our protagonist Harper Willowes quite quickly. With a love of British pop culture and an admirable strength both of character and physically, Harper has joined my list of favourite protagonists. I found that John Rookwood took a bit longer to endear himself to the reader. When we first meet John, he is under immense pressure and come across quite aggressive. Yet, the more we learn, the more likeable John becomes.

That’s not to say that everyone is Mary Poppins or Mister Rogers. There is a huge range of characters each with unique personalities, agendas and levels of evil. All of these characters elicit varying emotional responses from loathing and pity to disgust and love.

I was impressed by Hill’s ability to make good characters do awful things without making them unlikeable. There are several characters who are misled and make the wrong choices but, rather than disliking them for their mistakes, the reader feels empathy and even pity for them. Though I know at least one of them would hate that.

Fans of Joe Hill who have read NOS4A2 will know that if you don’t read the credits and acknowledgements of a novel, you risk being taken to Christmasland by Charles Manx (not a good thing). It’s worth sticking around for these often ignored sections in The Fireman for a tiny snippet of extra story. Think of it as the end credits scene of a Marvel Cinematic Universe film.

The Fireman is a heck of a ride with a great story, fantastic characters and a healthy dose of rock ‘n’ roll and British pop culture references. Highly recommended for readers who enjoy science fiction and dystopian/apocalypse novels. However, much like The Walking Dead, this is less a story about the end of the world and more a story about the reactions and decisions of the people who survive the end of the world.