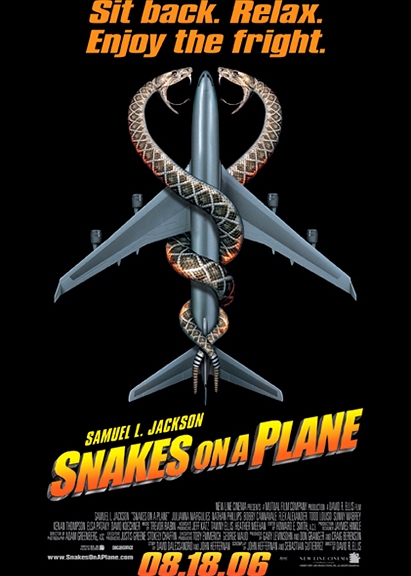 There are snakes. They’re on a plane. Madness and chaos ensue.

Given my love of natural horror films, it was a surprise to even myself that I hadn’t watched Snakes on a Plane in its entirety. It was everything I had hoped it would be and so much more.

The overall concept of Snakes on a Plane is reminiscent of early 90s action movies. Simple plot, full of action, a dash of comedy and some great one-liners. With lots of venomous snakes thrown in to mix things up a little bit.

The acting in Snakes on a Plane is a lot better than most natural horror movies which makes it a tough call to rate it as a b-grade cheese movie. Samuel L. Jackson and Julianna Margulies both overact just enough to fit in with the situation but still give convincing performances.

My favourite part of the film that doesn’t involve anyone being bitten on their genitals (I lol’d), is the blink and you’ll miss it setting on the microwave. Keep an eye out for it — subtle but very funny.

I would highly recommend Snakes on a Plane to viewers who enjoy fun natural horror movies or action movies from the 80s and 90s.