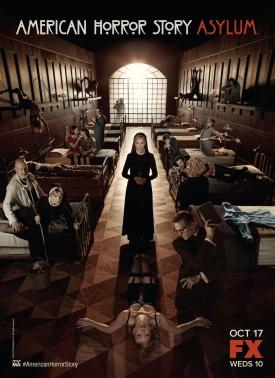 The story of Briarcliff Mental Institution, its patients and its staff as led by Sister Jude (Lange), Doctor Arden (Cromwell) and Monsignor Timothy Howard (Fiennes) in the 1960s.

Season two of American Horror Story, AKA Asylum, is just as weird as season one but in different ways. I still enjoyed season two as much as I did season one, but feel that the disclaimer “this show is messed up” still needs to be added.

I love that there are several actors who have returned for the second season of the anthology series. Not only does it give you the opportunity to watch them play a varied range of characters, but it also lets you watch the actors evolve from one season to the next. Sarah Paulson, Zachary Quinto and Lily Rabe all have vastly increased roles from the ones they played in season one. While Frances Conroy and Dylan McDermott’s roles are significantly shorter, though by no means less important.

Zachary Quinto’s portrayal of Doctor Thredson was outstanding. In hindsight, I’m shocked he didn’t win a Golden Globe or an Emmy. Though he did win a Critic’s Choice Television Award for  the role. There’s not a lot that can be said about the role without potentially spoiling major plot points, so allow me to just say that Quinto remarkably portrays every predicament in which his character finds themselves.

I enjoyed the twists and turns that AHS: Asylum takes its viewers through over the course of the season. There are several plots happening all at once and they all come together as if woven into an intricate tapestry.

AHS: Asylum generally has a dark and gothic feel to it both in content and visually. It makes sense then that one scene that stood out most for me is an impromptu 60s themed song and dance number. It was a fantastic contrast to the overall gloom and was just really fun to watch.

While AHS: Asylum has horror aspects, they are not the jump scares of modern horror. Instead, the horrors in AHS: Asylum come from human nature, cruelty, curiosity and evil.

AHS: Asylum continues on from AHS: Murder House, not in chronology but in a general sense of unsettling fascination with the stories unfolding on screen. As with its predecessor, I recommend AHS: Asylum for fans of modern gothic horror or viewers who just like their television macabre, twisted and left of centre.

“The times may have changed, Doctor, but the nature of evil has not.”