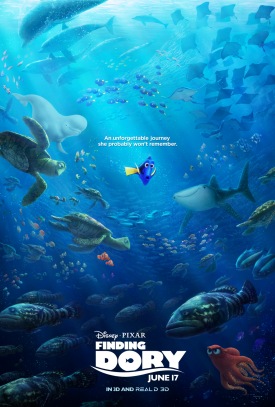 Watch this if you liked:
Finding Nemo, Ratatouille, Toy Story 3

When Dory (Degeneres) suddenly starts remembering clues about who her parents are, Marlin (Brooks) and Nemo (Rolence) agree to help her find them on a trek that will once again take them across the ocean.

To start with, Finding Dory is preceded by a Pixar short called Piper. It is not only a sweet tale about finding your own way in the world with adorable characters, it is also a visually outstanding short. Definitely try to make it on time for this added gem.

Personally, my favourite character in Finding Dory is Hank the octopus. He is a crabby loner but has three hearts of pure gold. Fans of Finding Nemo will be thrilled to know that not only are the big three back but several characters from the original film feature in Finding Dory. Make sure to stick around for a group cameo during the credits — it is delightful!

If you enjoy animated films that are big on humour and heart, I highly recommend taking the time to find Dory.