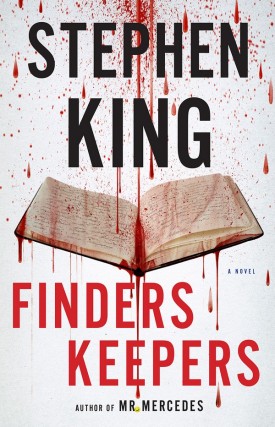 Jimmy Gold is the Holden Caulfield of the Finders Keepers world. He is a literary icon that appeals to misfits and outcasts spanning generations. From the man who murders Jimmy’s creator to steal his money and notebooks to the boy who finds the hidden trunk of money and writing while the former is in jail for an unrelated crime.

However, when the boy runs into the recently released man it becomes a battle of life and death. The boy’s sister goes to Bill Hodges (previously seen in King’s Mr Mercedes) for help when her brother starts to act strangely. But can Bill help someone whose obsession rivals that of a man willing to kill for it?

Stephen King is the master of horror, of that there is no doubt. His second foray into ‘hard-boiled detective’ writing has once again proven that he has no problems moving through genres with fluidity.

Bill Hodges is a character that I have loved seeing grow from being a solitary, suicidal shut-in to a man with renewed purpose and surrounded by people for whom he cares deeply. All characters within the universe are showing great evolution and, after encountering several series in which characters remained dull and stagnant, it is a refreshing experience.

Morris Bellamy is a twisted and sick villain. In his mind it is him against the world and everyone is out to get him. Every major setback in his life, caused by his own poor decisions, he is able to rationalise as being someone else’s fault. The villain with a victim complex is one of the most dangerous and fascinating types of villains. King portrays this one very well indeed. He becomes a person to loathe, not just a character to dislike.

The plot of Finders Keepers is exciting and different. A tale of revenge, obsession and greed that spans decades.

There is an ever so slight hint towards the supernatural in Finders Keepers that I feel will feature more prominently in the third novel of the series (currently titled End of Watch). I like the feeling of realism that the first two novels have brought to the Bill Hodges universe and think it adds a wonderful believability to the supernatural elements.

If you are a Stephen King fan, new or old, or just a fan of a good crime novel then Finders Keepers might be what you’re looking for on a relaxing Sunday curled up indoors. While Finders Keepers can be easily read as a standalone novel, it would be far more enjoyable if you grab a copy of Mr Mercedes and make a weekend of it.