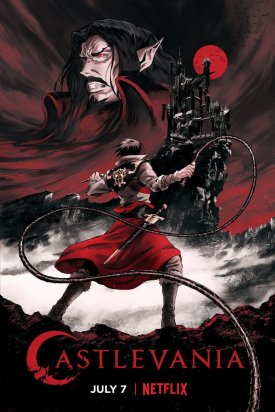 Writer:
Warren Ellis, Hitoshi Akamatsu (based on the series created by)

After humanity burns his wife at the stake, Dracula gives them one year to prepare for his army of demons. Trevor Belmont, the last in a long line of monster slayers, and his allies must band together to put an end to the heartbroken vampire’s vengeance.

I must admit, Castlevania wasn’t really on my radar for a few reasons despite being an avid vampire culture fan. But after having a friend recommend it, I decided to give it a go and was pleased to discover the good outweighed any of my misgivings.

I never really played the Castlevania games and so nostalgia wasn’t a huge draw card for me. I’m sure there are delightful homages to the series that went right over my head but, as far as a story goes, the first season of Castlevania uses its four episodes to introduce the characters and premise efficiently.

I generally find anime style animation to be quite clunky and distracting so I don’t watch it often. This meant that it did take me a couple of episodes to really get into the series, but ultimately the content far exceeds any personal issues I have with animation style. And let’s face it, anime is beloved by many people across the globe so I’m in the minority, but I thought it would be worth mentioning for anyone else who has the same challenge.

Despite the animation aspect, Castlevania is not for the kiddies or the easily offended adults. There is plenty of violence, language and mature content. There are also moments of all three that are hilarious if that matches your type of humour.

The dialogue in Castlevania’s first season is witty and adds much of the humour to the otherwise quite dark series.

Overall, the first season of Castlevania is quick, sharp and bloody. Everything you want from a vampire story in a bite sized season. Well worth checking out if you love horror or stories based on traditional vampire lore.

“The violence wasn’t necessary, sir. But it is appreciated.”