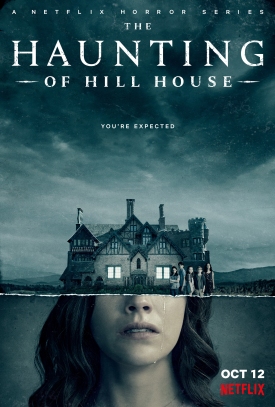 Writer:
Shirley Jackson (based on the novel by), Mike Flanagan

After living in a haunted house and their mother’s subsequent suicide, the five Crain children grow up with very different coping mechanisms. When youngest sister, Nell (Pedretti), commits suicide in the same place their mother did, the remaining Crain children must reunite with their estranged father to face the family demons once and for all.

I’m going to get this out of the way early on because it’s something I’ve seen in a lot of articles about season one of The Haunting of Hill House. Is it scary? Oh, my word, yes. Is it so scary that I threw up? Erm, no.

The Haunting of Hill House is a beautifully constructed horror series that has so many intricacies. You would be forgiven for thinking threads would be left unravelled and cliffhangers would be left to ensure a second season. But the entire first season is a well polished work of art.

While the connections to Shirley Jackson’s novel of the same name, on which The Haunting of Hill House is allegedly based, are tenuous at best, the story featured in the first season is brilliant. There are similarities to the novel that are best likened to homages — a name here and a quote there — but this isn’t the same old ghost story.

The first season of The Haunting of Hill House is without a doubt the finest horror masterpiece I have seen on the small screen and even contends with some of the works of art on the silver screen. It is a must see for anyone who enjoys supernatural horror and should be studied by anyone attempting to create a visual ghost story in future.

“Fear is the relinquishment of logic.”

2 thoughts on “The Haunting of Hill House: Season One”