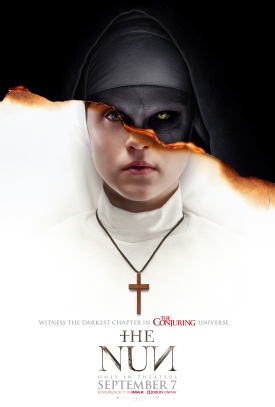 Watch this if you liked:
Annabelle, The Evil Dead 2, Lights Out

Father Burke (Bichir) and initiate nun, Sister Irene (Farmiga), head to a remote Romanian convent to investigate the suicide of a nun.

The Nun is a decent horror film, but it doesn’t have any of the nuances that make its predecessors The Conjuring and The Conjuring 2 truly great horror films. The absence of director James Wan has affected all three of The Conjuring’s spin-offs, but none as drastically as The Nun.

The thing I found most distracting about The Nun is the overexposure of the titular character. The reason the entity works so well in The Conjuring 2 is that it never feels overexposed. The Nun even managed to use the same jump scare tactic that was used by the same entity in The Conjuring 2.

All of that aside, there are some great moments in The Nun and if this were attached to any other horror franchise or its own film I would rate it higher. I would be lying if I said there weren’t a few times that I jumped. But I expect a better quality of horror from The Conjuring universe. There was a point in The Nun where the effects were so garish that I wondered if I had wandered into an Evil Dead movie and expected to see Ash burst in with his boomstick and chainsaw. (No shade intended, I freaking love The Evil Dead movies. But they’re a completely different aesthetic to The Conjuring’s universe.)

If I were to find a positive about the film as a whole within the universe, it would be that I do love how The Nun ties in with both The Conjuring and The Conjuring 2 at the beginning and end of the film. It brings it into the universe, even though it misses in terms of tone and ambiance.

There are also a few really gorgeous shots and a couple of brilliant moments. However, most of the gorgeous shots are sweeping outdoor shots and, as reported by director Corin Hardy, the outdoor reshoots were done by James Wan.

I’m by no means trying to dissuade anyone from going out and seeing The Nun. For a horror film with a director on his second motion picture, it is okay. I just don’t want people to go in with the high expectations I had from the studios saying it is the “darkest chapter in The Conjuring universe” to the ad being banned from YouTube for being too scary.

“What’s the opposite of a miracle, Father?”