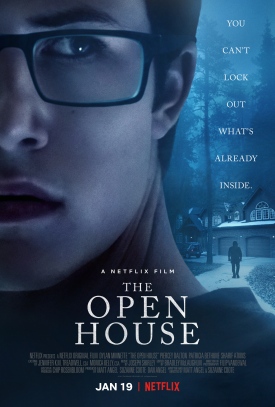 Watch this if you liked:
The Strangers

After the death of his father, Logan (Minnette) and his mother (Dalton) fall on hard times and move in to his aunt’s mountain holiday home. The holiday home is for sale so the family

The Open House had the makings of a modern horror classic, but it slammed its door in the face of so many opportunities that it just didn’t make the reserve.

The acting is pretty average, but it’s not the worst I’ve seen. It’s not helped by the unconvincing characters, the shoddy dialogue and choices that seem stupid even for a horror film.

The Open House does have one brilliant moment when Logan is in the basement of the house and lights a match. But that’s vastly overshadowed by the amount of cringe worthy stupid moments there are, and the fact that Logan and his mother are apparently the worst match lighters in the history of humans having discovered fire. Seriously, it takes them both at least three tries to keep a match lit. I understand the filmmakers are trying to build suspense and use lighting in an interesting way, but it became ridiculous.

Another big issue that I have with The Open House is the amount of things that it introduces but never follows through on. A huge deal is made about one of the characters’ special skills but it is never actually followed through on and has no real payoff. There are characters that are brought in as red herrings but never pay off and never have a follow up the time invested in them deserves.

Overall, The Open House starts out promising and has glimmers of what could have been but the foundations are rotted and it would be far easier to just knock it down and rebuild.

“I mean, you give your keys to someone you hardly know, they stand in one room and welcome in a bunch of complete strangers and those people just roam around the house. And the realtor doesn’t check the house when it’s done, right? They just … turn the lights off and go?”