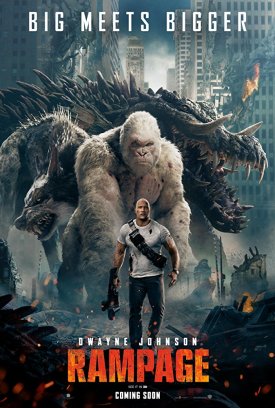 Watch this if you liked:
King Kong: Skull Island, Jumanji: Welcome to the Jungle, Godzilla (1998)

Three creatures become infected by the pathogen — a wild wolf, a wild crocodile and a rescued gorilla named George. When the creatures start showing uncontrollable aggression, the military step in to destroy them. George’s human carer and friend Davis Okoye (Johnson) must join forces with genetic engineer Dr. Kate Caldwell (Harris) and OGA Agent Harvey Russell (Morgan) to save George.

I bought a ticket to see Rampage without having seen a trailer or knowing anything about the plot. All I knew was that the poster had Dwayne Johnson, a giant gorilla and a giant lizard creature (that I knew looked like a crocodile but the tusks threw me) — I was sold. And I will tell you what, boos and ghouls, this ghoul knows what she likes. Rampage is a fun, over-the-top action flick with plenty of laughs, explosions and giant monster induced destruction.

Dwayne Johnson is quickly becoming one of my favourite actors, not just in terms of action but comedy and overall talent as well. Johnson’s role in Rampage is physically intense, a little bit heart-warming, a little bit funny and a whole lotta badass.

Jeffrey Dean Morgan is another actor who I gain more respect for every time I see a performance. I first knew him as John Winchester in Supernatural and most recently as Negan in The Walking Dead. Morgan’s performance in Rampage is kooky and very funny.

I loved how the animals look in Rampage. They are well developed and visually effective. The wolf was probably the weakest in terms of visuals for me, but it is still a fine looking giant wolf with quills.

I was torn between giving Rampage stars or cheeses. It is a good quality action film, but a spectacular monster movie so I have gone with cheeses. Rampage brings to the screen a ridiculous plot with crazy creatures and over-the-top stunts, but the result is a very funny two hours of explosive entertainment.