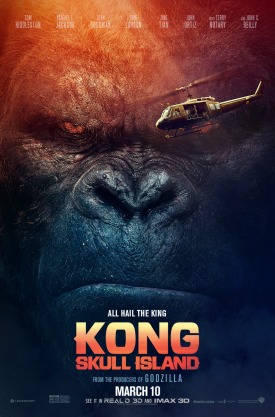 Watch this if you liked:
Godzilla (2014), Jurassic World, Rise of the Planet of the Apes

A group of scientists, soldiers and assorted civilians head to a newly discovered island to explore. What they find will change their lives and the world as they know it forever.

Kong: Skull Island is the second film in the MonsterVerse.

I enjoy monster movies. They’re fun, they’re a bit silly and the modern ones usually have loads of action. Kong: Skull Island incorporates these aspects and more to bring you an exciting film that introduces some great characters to what I believe will be a very fun franchise.

Kong: Skull Island has a decent plot as far as monster movies go. It doesn’t go into a lot of character backstory or get muddled up in human shenanigans like Godzilla did. There are explanations that make sense in terms of the film’s world, but there are also lots of scenes where the giant gorilla takes on the humans, the Massive Unidentified Terrestrial Organisms (MUTOs).

When I saw that Kong: Skull Island goes for two hours, I must admit that I was dubious. Can there be enough action to keep me entertained for 120 minutes without getting repetitive? Yes, apparently there can! I was surprised when the film began to wrap up because those two hours flew past.

The soundtrack to Kong: Skull Island is a fun assortment of rock songs from the 60s and 70s. It adds a feeling of fun and frivolity where appropriate. The original score adds atmosphere and menace where necessary. Together they bring the film to life in a marvellous way.

If you are looking forward to the continuation of the MonsterVerse (started by 2014’s Godzilla and continued in Kong: Skull Island) then it is well worth waiting for the after-credits sequence.

Kong: Skull Island is a great representation of a modern monster movie. It has heart, action, an amazing soundtrack and giant monsters fighting each other. Perfect for a couple of hours of fun you don’t need to think too much about. (Seriously, don’t think too much about it. It’s a movie about a 100 foot gorilla. It’s not a Mensa exam.)

“This planet doesn’t belong to us. Ancient species owned this earth long before mankind. I spent 30 years trying to prove the truth. Monsters exist.”