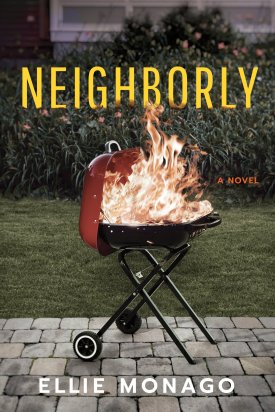 New parents Kat and Doug found a quaint home and moved into the perfect neighbourhood with flawless neighbours. But when Kat starts to receive increasingly threatening notes that allude to a past even her husband doesn’t know about, will she be able to convince Doug that the neighbours aren’t all that neighbourly or will she be left out in the cold?

Neighborly has an interesting plot and that buys it a lot of leeway. I was interested enough in the plot to finish it despite the painfully flawed characters and their inconsistent development, terrible pacing and convenient ending.

The main character, Kat, has had a troubled life and experiences a variety of anxieties and self-confidence issues as a result. Unfortunately, these are often so forced down the reader’s throat that it makes for a character that is not particularly likeable.

Kat’s husband, Doug, is quite loathsome. The character comes across as petty, petulant and passive-aggressive, all while his wife is thinking how undeserving she is of him. I found him to be more unlikeable than the “villain” of the piece.

The rest of the characters seem like filler made to create potential red herrings. There are only a few whose names I can recall and there are even less on whom I can remember more details.

In terms of character development, it seems much like sky diving. There is a lot of waiting around, not doing anything and then suddenly the characters cross a huge distance in the last few minutes.

The plot was a great idea. The villain had me guessing. Unfortunately, the story has the same pacing issues as the character development. A whole lot of not much happens then it speeds up and is suddenly all over. As a result of the plot pacing, there is no suspense and, as a result of the character development, I couldn’t bring myself to root for anyone.

Overall, I found Neighborly to have a good plot idea and whodunnit behind it, but it lacks immensely in terms of execution. I couldn’t recommend picking it up unless you love the thriller genre enough to read even the below average representations.