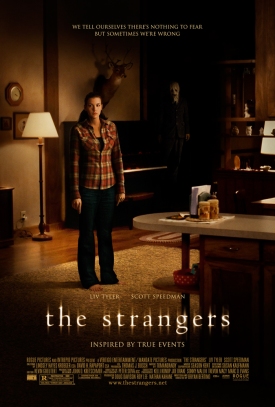 Watch this if you liked:
You’re Next, Vacancy, When a Stranger Calls

James (Speedman) and Kristen (Tyler) return to his family’s secluded holiday home after a wedding where James unsuccessfully proposed. As if things weren’t awkward enough, a trio of masked assailants start harassing the couple.

The Strangers is probably the best thriller style horror movie I have seen since You’re Next.

The atmosphere in The Strangers is gritty and intense, which is precisely what you want from a film about home invasion in the middle of nowhere. The sense of isolation that the film builds went a long way towards creating some great suspense.

Tyler and Speedman both give good performances. They seem in parts to be a little bit flat, but the film makes a point of showing that they’ve had a big day and it’s 4AM when things start going down. So for the most part, I was fascinated by this and really hope that the flatness was an intentional choice.

I loved the character development of the couple being hunted. Even more, I really enjoyed watching their antagonists portray their different personalities with few or no words. A lot of criticism gets thrown the way of the silent antagonists, such as Jason or Michael, being boring. However, The Strangers has taken this concept, bent it just a little and made it work a lot.

The Strangers is a vastly underrated horror flick that fans of the slasher genre, psychological thrillers and suspense should definitely check out. What it lacks in bodies, it more than makes up for with atmosphere and tension.