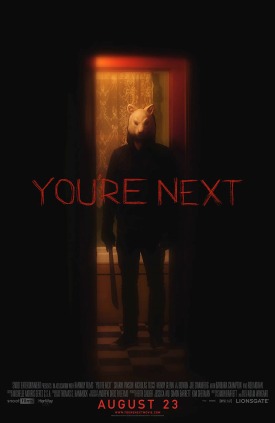 Watch this if you liked:
Friday the 13th, Halloween

Aubrey (Crampton) and Paul (Moran) celebrate their 35th wedding anniversary with their four children and their partners. During the celebrations the family are attacked and murdered by a group of killers wearing animal masks. Who will survive and who will be next?

It’s not often a horror movie startles or shocks me but there were several moments in You’re Next that accomplished this.

The film has the same feel (albeit modernised) as many of the best slasher films. The characters are stalked then picked off one by one as they separate from the herd. It’s a cliché formula but it is what makes slasher films work. It’s a good reminder that horror films don’t need to be filled with gore and graphic torture to be terrifying.

The intricacies of You’re Next are clever. There are some parts that upon first review, I thought were loose plot points — mentioned and never followed up. Upon further examination, I realised that these were key indicators to the depth of what was happening and the motives.

There is a song that is played throughout You’re Next that, when first played, is an innocent and upbeat rock song. The further you get through the film, the more sinister it feels. Not every song could have achieved this but the one chosen by the filmmakers accomplishes this perfectly.

You’re Next is a great horror film with unexpected twists and a great female lead. Definitely recommended viewing for horror/slasher movie fans.

“I’ll clean it up later. Just like the rest of this fucking mess!”