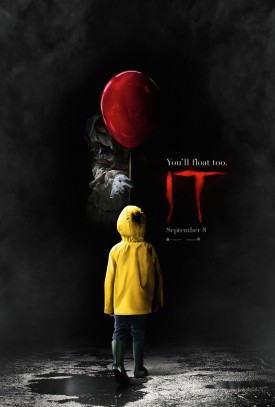 Watch this if you liked:
Lights Out, Evil Dead, The Conjuring

Seven friends discover they are all being hunted by the same malevolent entity that has been feeding on children for centuries.

It is hands down my favourite film of 2017. There have been a lot of great films, but this one takes the cake. I loved the novel on which it was based and was scared as a child by the miniseries adaptation starring Tim Curry, so I went in with high expectations and left completely blown away.

The film focuses on the childhoods of seven friends tormented by a supernatural creature that primarily takes the form of a clown. Their adult encounters with Pennywise will be featured in chapter two which is slated to start production next year. As a result, It is much tighter and includes more scenes from the novel than the 1990s miniseries.

The child actors portraying the seven members of the losers’ club are all extremely talented. Never did I feel the need to cut them some slack because they’re young and unseasoned. The stand out performance though is from Grazer who portrays young Eddie Kaspbrak. Grazer nails his role and gives likeability to a character who seemed whiny and annoying in the first adaptation. As with Skarsgård, it is the small things in Grazer’s performance that make it a joy to watch.

Another aspect of the child characters in It is that they are well written. The whole film has been well adapted to screenplay, but it is worth noting that the children have been transferred brilliantly. Each of them show a different aspect of adolescence, but none of them have the one-dimensional feel to them that I often associate with badly written young characters. The children in It manage to retain their authentic feel while still resonating with an adult audience.

It is what every film based on a Stephen King book should be. It is terrifying, disturbing, has great characters and the actors do a phenomenal job of bringing the story to life. If you like horror then you absolutely must see this year’s best horror film and the best film adaptation of a book from the genre’s master.

“What a nice boat. Do you want it back?”