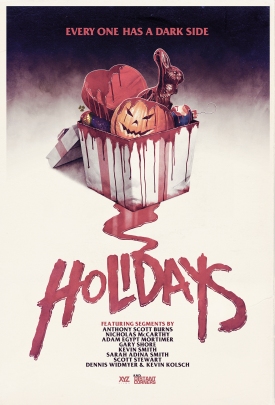 Holidays has the shoddy look, inconsistent story quality and downright weirdness of shows like Tales from the Darkside and Tales from the Crypt but without the charm of its predecessors.

I almost didn’t make it all the way through Holidays because the four weakest (in my opinion) stories are the first four. The next three are okay but nothing special. The final story in the anthology is the one I enjoyed the most.

All of the tales found in Holidays have predictable twists, gory scenes for the sake of gore, uninteresting stories or a combination of all three. I didn’t find any of them to be particularly scary or memorable.

The retro special and visual effects featured in Holidays alongside modern technology should give the film a timeless feel like that found in It Follows. Instead it just leaves already lacklustre stories feeling confused and muddled.

The acting in Holidays ranges from unbearable to just okay. Even the actors who have talent either ham it up or phone it in.

The short feature collection with a twist thing has been going on for decades and has been executed much better in the past than what Holidays has to offer. If you have an hour and a half to spend on a horror anthology flick, you’re better off watching Tales from the Darkside: The Movie.

“No, you’ll be treated like a queen here. I promise.”