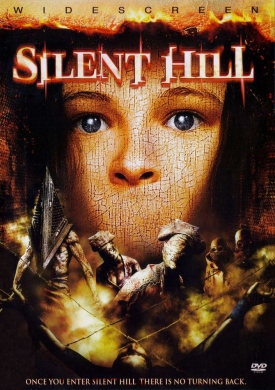 Watch this if you liked:
The Mist, Ghost Ship, Mirrors

Rose (Mitchell) and her adopted daughter Sharon (Ferland) go to the abandoned town of Silent Hill to uncover the cause of Sharon’s nightmares and sleepwalking. What they find is a town far more sinister than either of them could have imagined.

Silent Hill starts off slowly but once it gets going it combines action with story well. I have never played the Silent Hill game franchise, so was unfamiliar with the story. From a film perspective though, the plot is interesting.

The film loses some of its engagement by having characters that are barely two dimensional. While not uncommon in a horror film, the best ones generally give the viewer a reason to care what happens to the characters. In Silent Hill, I wasn’t concerned about the outcome because I didn’t have much interest in the characters.

While the CGI is very outdated, even for the time it was created, the atmosphere in Silent Hill more than makes up for it. Visually the film makes good use of lighting and colour to set the tone and mood.

In terms of horror Silent Hill doesn’t have a lot in the way of suspense, instead relying on gory imaging and disturbing characters to induce fear.

Overall, Silent Hill is a good quality horror film that isn’t for the squeamish. While it has its flaws, it certainly exceeds the level of quality usually associated with films based on video games. Worth a watch if you enjoy atmospheric horror films with simple but interesting stories.

“When you’re hurt and scared for so long, the fear and pain turn to hate and the hate starts to change the world.”