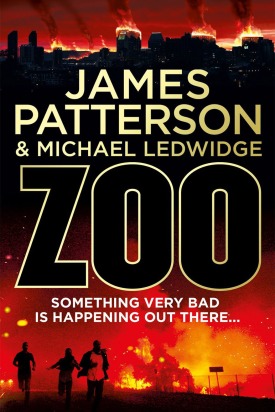 When the animals of the world start to behave out of character and make targeted attacks against humans, Jackson Oz takes notice. Oz is a biologist whose obsession with his discovery has cost him his PhD, relationships and at least part of his sanity.

Oz shares a profound experience involving lions and crocodiles with ecologist Chloe Tousignant. During this experience, Oz records indisputable evidence of the change in animal behaviour. Oz and Chloe must then work together to convince the government that the world is changing in ways humanity never expected.

ZOO has a great premise. I started reading it because the first season of the television adaptation was on Netflix and I wanted to read the novel before watching the series. While I finished ZOO without too much trouble and still believe it is a fantastic concept, I had several issues with the novel overall.

Jackson Oz is the only character in the story who has any depth and he’s not very likeable. He has heroic moments but as a whole his condescension and superiority complex make it hard to root for him. If a lot of the book weren’t written from Oz’s perspective, I would have assumed he was up to something.

Most of the rest of the characters in ZOO are purely background noise to support or hinder Oz. Even Oz’s pet chimpanzee (yep, while he intently studies the animal world going to Hades, this guy thinks it’s a good idea to keep an already dangerous animal in his apartment) has more depth than a lot of the human characters featured in the story. An animal with personality is a great thing in a novel of this nature, but nearly all of the other characters could have used some as well.

I found the chapter structure to be quite distracting. In a 395 page novel, there are 98 chapters plus an epilogue. This is an average of about four pages per chapter. I feel this may have been done to keep the story fast paced and moving quickly. However, it just made the story seem clunky and stop-start. In the same way, the choppy writing structure was difficult to read at times. Usually sharp sentences keep the action moving, but in this case I found that the sentences were too abrupt when there was no action, it made the book seem overly clipped.

Overall, I would recommend ZOO to readers who are entranced by the concept of the novel. It is a good concept and, if you can get past the above things, is an interesting read.