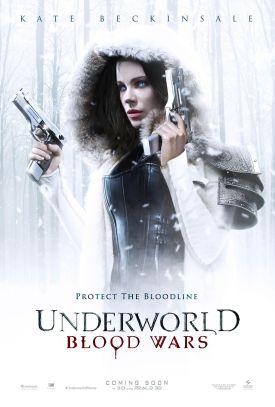 Watch this if you liked:
True Blood, Queen of the Damned, Underworlds 1-4

The war between the vampires and the lycans continues. Death dealer Selene (Beckinsale) is dragged back into the war by a vampire coven requesting her help. Can she help end the war that has raged for centuries or will she meet her own end?

Underworld: Blood Wars is the fifth film in the Underworld series.

I’ve enjoyed all of the Underworld films so far simply for the fact that they are dark, supernatural action films. Underworld: Blood Wars continues to do the franchise proud in these regards.

There are no quips or wisecracks, instead there are brilliantly choreographed fight sequences both one-on-one and lycan horde vs vampire army. The visual effects are fun to watch and for the most part do a great job of adding to the scenes taking place.

Kate Beckinsale’s reprisal of Selene is fantastic. It has been 13 years since the original Underworld and four years since Underworld: Awakening but Beckinsale slips back into the dark trench coat and darker demeanour with precision.

The overall plot of the Underworld series is getting a bit convoluted, as is to be expected from any franchise that spans five films over 13 years. However, Underworld: Blood Wars counters this by having a concise and comprehensive synopsis at the beginning. This synopsis doesn’t detract from the flow of the film and will definitely help viewers who have not seen the preceding four films.

“You are merely adequate.”