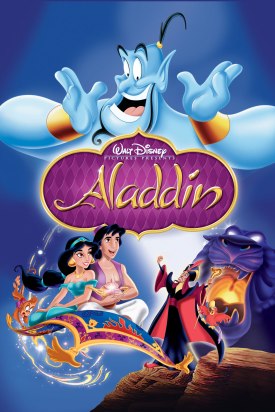 Watch this if you liked:
Beauty and the Beast (1991), Tangled, The Little Mermaid, The Princess and the Frog

Aladdin is a ‘street rat’ who has a chance encounter with Princess Jasmine that changes both of their lives. The problem is that Princess can only marry a prince. When Aladdin finds a magic lamp and releases the genie inside, he wishes himself into a prince so that he can marry his true love. However, the evil Jafar and his feathered accomplice Iago have other plans …

I remember seeing Aladdin in cinemas when it was first released. The magic, the humour and the delightful soundtrack all made for a day out. Fast forward 24 years and not a lot has changed!

The songs in Aladdin are wonderful. They are upbeat and you can’t help but want to sing along with them. Even the token ballad has lounge room karaoke classic written all over it.

In today’s world of computer animated films, I love watching classic animation on the big screen. You can catch the occasional glimpses of actual pencil strokes. To me this enhances the genuineness of the feature.

Aladdin is one of many great reminders of how talented the late Robin Williams was. The character of Genie was drawn around the in-genie-ous [I’m not even sorry] improvisations provided by Robin Williams and Aladdin is a better film because of it. Genie’s vibrant personality, hilarious reactions and spot-on impersonations bring Aladdin from a great film to one of the best.

If you have the opportunity to revisit Aladdin in a cinema setting, I would highly recommend it. The film is almost transformed into a whole new movie.

“Oi! Ten thousand years will give you such a crick in the neck.”