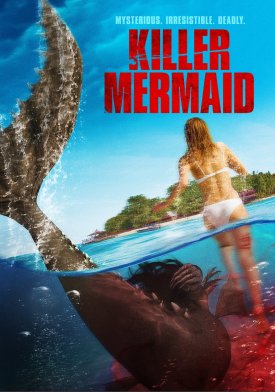 Two girls from the USA, Kelly (Klebe) and Lucy (Burn), arrive in Montenegro to holiday with Lucy’s college ex-boyfriend (Stefanovic) and his fiancee (Rajovic). When they and another local (Micanovic) decide to check out an abandoned prison island, they find themselves part of a world they didn’t even know existed.

Killer Mermaid was not at all what I expected. To be honest, I expected a standard Syfy quality (b-grade) horror movie with a thin plot, lots of gore, cheesy dialogue and horrendous special effects. Instead, I was surprised to discover a decent monster flick still with pretty bad special effects.

When I say “pretty bad special effects”, the main part that let it down was the mermaid tail in scenes. For the most part, the special effects are on par with other independent or low budget films. The result is not as humorous as most b-grade monster movies but does not do the film an injustice.

There are a couple of plot points that feel crammed in to give the characters depth before they are picked off one by one. A fear of water. A forbidden love triangle. Neither of which have any real bearing on the plot. In addition to this, the end of Killer Mermaid is frustrating both because it feels like the film doesn’t end and it goes against what has been said earlier in the film.

Don’t worry though, there are still plenty of times when the characters make terrible decisions and put themselves in stupid situations. I spent most of the third act yelling at the television and grasping my head in exasperation. Watching horror movies is almost a spectator sport at times and Killer Mermaid was one of these times.

Despite a few small hiccups, I enjoyed Killer Mermaid immensely. It is an interesting addition to the monster movie genre and gives viewers a glimpse into why it’s not always better down where it’s wetter.

“I bet he knows what you did last summer.”