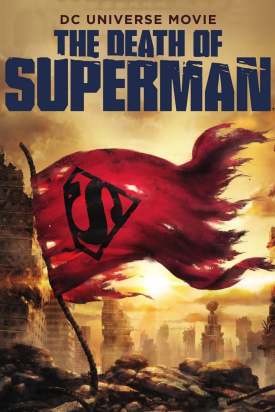 Watch this if you liked:
Superman: Doomsday, Batman: Gotham Knight, Batman: Year One

When an alien monster, dubbed Doomsday, lands on Earth, the Justice League tries to stop it. After his colleagues have fallen, it becomes Superman’s duty to take down Doomsday — even if it means paying the ultimate price.

The story shown in The Death of Superman is a fairly faithful adaptation of the classic comic arc and is well paced. The characters featured all have a chance to shine and it is the relationships between members of the Justice League that warmed my nerdy little heart most of all.

The only thing that bothered me on occasion is the animation style. There are times early on where the style of animation feels like a throwback to the 90s-00s DC cartoons so I was looking forward to that. But then there are other times where the style becomes almost anime-like which doesn’t feel like it fits.

Overall, The Death of Superman is one of my favourite films in the DC Universe Animated Original Movies lineup so far. There are some great films in the collections but, despite my distraction by the animation style, The Death of Superman stands out by leaps and bounds in terms of plot, dialogue and characterisations. Highly recommended for anyone who loves the DC universe and their flagship characters.

“Does that asteroid look unusual to you?”