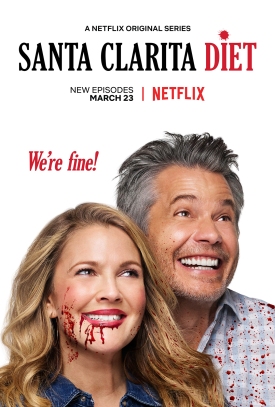 Season two of Santa Clarita Diet starts with Joel (Olyphant) in a psychiatric hospital, his undead wife Sheila (Barrymore) chained up in the basement, and their teenage daughter Abby (Hewson) trawling Craigslist for fresh Serbian bile. Things can only go up from here, right? Right?

When I finished season one of Santa Clarita Diet, I raved about it to everyone with whom I regularly talk pop culture. Well, strap yourselves in because here I go again.

Nathan Fillion absolutely makes season two. Hands down. The rest of the main cast are supremely talented and their characters are very funny, but Fillion comes out ahead for his quirky portrayal of a well-written character who I will not say any more about for fear of unleashing the spoiler monster.

I love the dialogue in Santa Clarita Diet. It is funny, quirky, witty and everything you would expect from a sit-com about the undead. You might say it has real bite. I wouldn’t though because I am above such terrible puns. (Maury Povich: That was a lie.)

Overall, the series uses bright sets, sharp humour and almost Brady Bunch style feel-good moments to contrast with the gore and chaos of living with a newly undead wife/mother. It shouldn’t work but it does.

The ending to season two of Santa Clarita Diet was a ridiculously good cliffhanger for a sit-com and I can’t wait for season three so that I can join Sheila, Joel, Abby et al on even more wacky undead adventures.

“Our kitchen looks like the inside of a shark.”