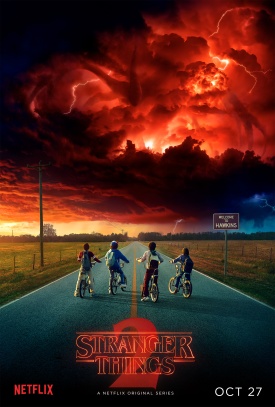 One year after the people of Hawkins banded together to fight a shadowy evil from an alternate dimension, Will Byers (Schnapp) has visions of an evil that is fighting to make its way back into their lives. Can the awakened of Hawkins save their town again or will this be their final roll?

The first season of Stranger Things was impressive so I was intrigued when the second season was released. While I wouldn’t say the continuation exceeded its predecessor, it certainly lived up to its legacy of wonderfully weird television with a great cast, decent story and more 80s nostalgia than you can poke a proton pack at.

The evolution of Stranger Things’ plot was fun to watch. There are call backs to the first series without it seeming repetitive, the characters have all grown and we have a few newbies thrown into the mix.

Brown once again steps up as Eleven, the telekinetic and pseudo-telepathic protagonist. Eleven has evolved significantly since we last saw her and Brown’s performance, in addition to good writing, does a great job of portraying that.

Sean Astin was a lot of fun to watch as Joyce Byer’s (Ryder) boyfriend Bob. Keep an eye out for a subtle nod to Astin’s role in The Goonies.

I don’t always love movies or TV shows where kids are the primary protagonists because a lot of writers seem to think this excuses a lot of flaws, bad dialogue and generally stupid decision making. Now, don’t get me wrong, the kids in Stranger Things do a lot of stupid things, but so do the teenagers and the adults. That’s not an excuse, but for the most part there is a clear reason why they have made their choices, stupid or otherwise. It never feels like a cop out decision because of the age of the character, instead the choices generally seem to have a motivation, stem from an emotional response or do actually seem like the best stupid choice out of a whole mess of stupid choices.

If you enjoyed the first season of Stranger Things then the second will keep you just as entertained. If you haven’t yet checked out Stranger Things and enjoy 80s coming of age, science fiction or horror flicks then it’s well worth jumping onboard now that a third season has been announced.

“Alright, I’m just going to be out here by myself eating all this candy. I’m gonna get fat. It’s very unhealthy to leave me out here.”