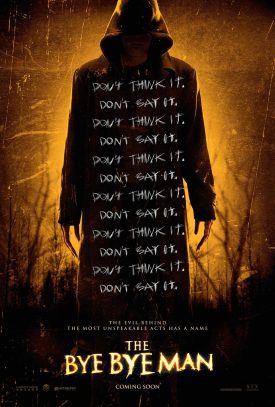 Watch this if you liked:
Rings, Jeepers Creepers

When college student Elliot (Smith) moves off campus with his girlfriend Sasha (Bonas) and friend John (Laviscount), he thinks his life can’t get any better. But their new home holds secrets that everyone is better off not knowing.

The Bye Bye Man starts off as a great and intriguing film that has an eerie vibe with spooktacular atmosphere … for about 20 minutes. From there, the film quickly devolves into a shadow of what it could be by overexposing the villain, overdoing tacky cheap plot devices and tacking a superfluous few minutes onto where the film should have ended in order to create an unnecessary twist.

The actors do a good job with what they are provided in The Bye Bye Man. While the film itself devolves, the acting was pretty consistent throughout — not fantastic but still good.

I wanted to like The Bye Bye Man. It had a great idea and started out with a gritty, dark vibe that reminded me of It Follows, but it just didn’t hold up. I would recommend watching perhaps the first half hour, then pretending it ended when the wrong name is said in bed.