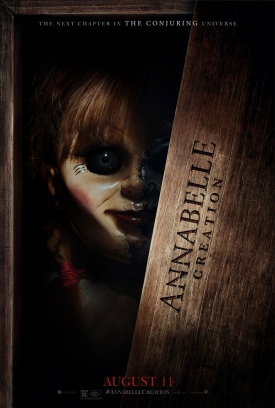 Watch this if you liked:
The Conjuring, Annabelle, Lights Out

When their orphanage closes down, Sister Charlotte (Sigman) takes her six charges to live with a kind couple doing their Christian duty. What Sister Charlotte doesn’t know is that when Samuel (LaPaglia) and Esther (Otto) lost their daughter, they would have done anything to get her back — and they did.

I was fortunate enough to see an advance screening of Annabelle: Creation today. When we walked into the foyer, there was a circle of seats for guests to use virtual reality and immerse themselves in Annabelle’s world. In the middle of these chairs, sat the eponymous doll herself. Poised in her rocking chair. Waiting. We entered the cinema, chose our seats and fooled around with our Annabelle masks until the show started. Suddenly, a spotlight hit the side of the screen and there she sat. Watching. Then by the end of the film, she had disappeared. Off to cause some mayhem, I have no doubt. A+ to Village Cinemas and Village Roadshow for theatrical showmanship.

The film itself is a spine-tingling journey through another chapter in The Conjuring universe. The prequel to the first spin-off of a film inspired by a true story has no right to be good, yet Annabelle: Creation defies the odds. A talented cast and crew do a great job of bringing terror to life on the big screen.

While a lot of it is screaming — honestly, what would you do if you were being terrorised by a possessed doll? — the dialogue is well written. There are many examples of this, but the first one I noticed is when one innocent line from Sister Charlotte illustrates just how isolated they are from any form of help. The dialogue in Annabelle: Creation does a lot of showing over telling and it works in its favour.

I enjoyed Annabelle: Creation’s plot. It is simple yet effective and explains a lot of things about the titular character’s past while still providing plenty of horror entertainment.

If you love jump-scare horror films and enjoy the preceding films in The Conjuring series, Annabelle: Creation is a must see.

Keep an eye out for:
There is a brilliant cameo from one of the characters that already exists in The Conjuring universe. There is also a great homage to the real Annabelle, who is in fact a Raggedy Ann doll.

“Forgive me, Father, for I am about to sin.”