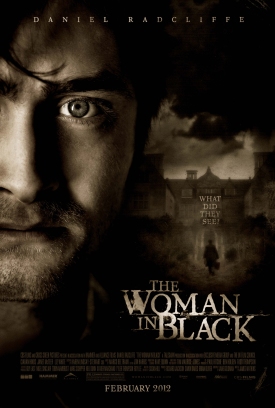 Watch this if you liked:
Crimson Peak, The Others, The Conjuring

Around the turn of the 20th century, lawyer Arthur Kipps (Radcliffe) is sent to a remote village in England to go through the mountains of papers belonging to a now deceased client. After a cold reception from the townsfolk, Arthur makes his way to the client’s house but finds much more than just some dusty old papers.

The Woman in Black is a classic ghost story with beautiful set designs and Edwardian period costumes.

As far as scares go, The Woman in Black is more chilling than thrilling. The anticipation of a scare is far more prevalent throughout the film than actual scares. It makes for a suspenseful viewing while the tension keeps building and only provides minor payoffs for the viewer’s rising adrenaline levels.

Daniel Radcliffe gives a pretty average performance as Arthur Kipps, the grieving widower with a young son. While I didn’t find a lot of Radcliffe’s performance to be particularly compelling, it manages to get the job done.

The plot of The Woman in Black is loosely based on the gothic novel by Susan Hill. The film stays true to the ghost story formula that has worked for so long and will continue to work into the future. While it doesn’t bring anything new to the haunted house mythos, it takes nothing away.

Despite that I found the acting to be mostly wooden and unconvincing, I feel that The Woman in Black is a good ghost story that every horror fan should watch at least once.

“I believe even the most rational mind can play tricks in the dark.”