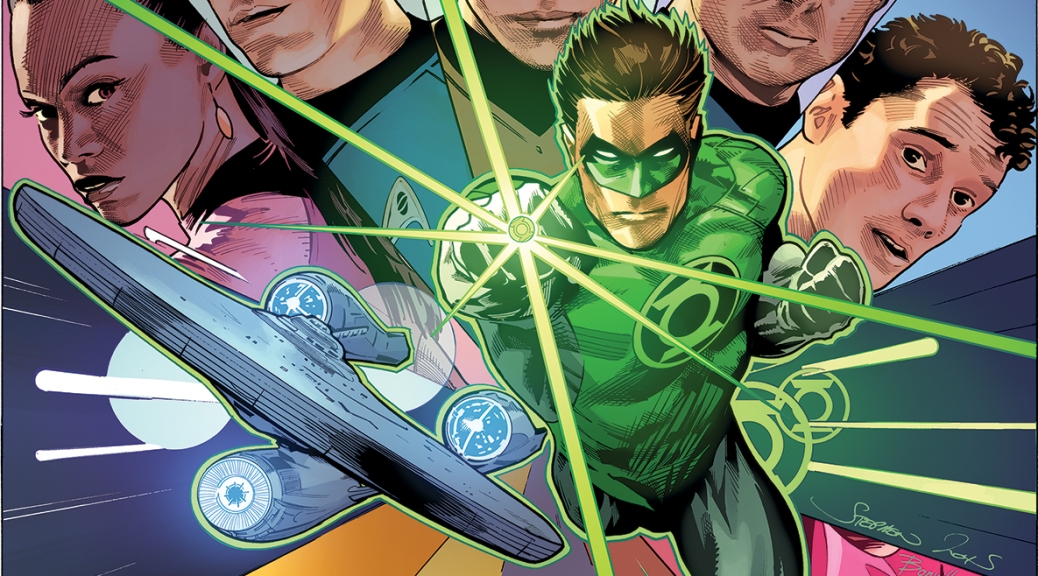 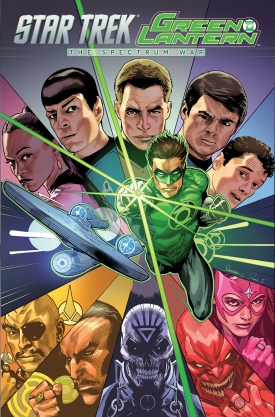 When the greatest heroes and villains of the galaxy are unable to stop Nekron, Guardian Ganthet uses a last resort that sends the remaining ring-bearers from all spectrums to a parallel universe along with a new ring of each colour.

The universe to which the remaining lanterns are sent just happens to be the same universe in which Captain James T. Kirk and his crew are boldly going where no-one has gone before.

The heroes from both universes soon realise that Nekron was amongst the ring-bearers transported to the Starfleet universe. It is up to the crew of the Enterprise, Hal Jordan and the rest of the ring-bearers to put an end to Nekron once and for all.

Crossovers always have the potential to be really good or really bad. Luckily for me, The Spectrum War falls into the former category. The Spectrum War manages to remain faithful to the style and humour of both franchises.

The Spectrum War is set within Star Trek’s rebooted universe and the characters are drawn well to reflect this. The art throughout The Spectrum War is, for the most part, consistently great quality. It is very similar to the style of IDW Publishing’s Star Trek comic series set within the same rebooted universe. There are only a couple of places throughout the book where I found myself distracted by a panel that didn’t look quite right. Even these panels weren’t awful, there was just something minor off about them.

The plot of The Spectrum War is a lot of fun to read. I don’t think this would be the case for people who aren’t fans of the Green Lantern comics or Star Trek, but as a fan of both franchises, I thoroughly enjoyed The Spectrum War. That’s not to say readers unfamiliar with either franchise can’t enjoy the story, but the plot moves right into the action and doesn’t spend a lot of time dwelling on backstory.

I would highly recommend The Spectrum War to readers who enjoy fast, action-packed stories — especially those who already enjoy the separate universes of Green Lantern and Star Trek.