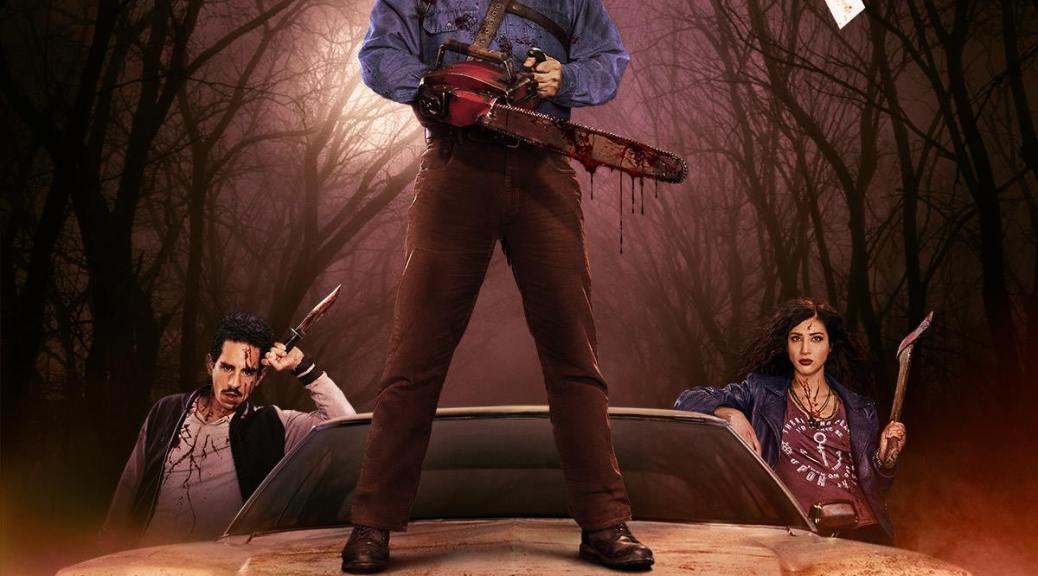 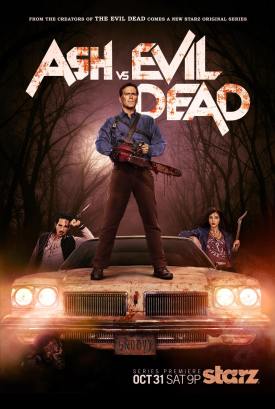 Thirty years after the events in the Evil Dead films, Ash Williams (Campbell) has spent his life hiding from the Deadite army. In a drug induced stupor, he reads from the Necronomicon which draws the Deadites to his location.

Ash’s first instinct is to flee the forces of evil once again but he is convinced by friend Pablo (Santiago) to help their colleague Kelly (DeLorenzo) when her mother returns from the dead. The unlikely trio band together to put a stop to the army of darkness once and for all.

Fans of the original Evil Dead trilogy will be thrilled to hear that Ash vs Evil Dead stays true to the series’ unique brand of horror comedy. The slapstick physical humour, brilliant wisecracks and extreme gore that we know and love from the films all feature in Ash vs Evil Dead. Abundantly.

The plot of Ash vs Evil Dead is a graceful and well thought out addition to the original film series. It’s the story I never knew I wanted to see despite being a big fan of the original films.

Bruce Campbell slips back into the role of Ash like it was only yesterday he introduced a medieval society to his boomstick. He’s rude, he’s crude, and he’s all out of bubblegum! Whoops, wrong pop culture reference. Moving along … Campbell’s revival of the chainsaw wielding Ash is a huge part of why Ash vs Evil Dead is so enjoyable.

Campbell’s co-stars also contribute greatly to the enjoyment of the series. Sidekicks Pablo and Kelly, played by Ray Santiago and Dana DeLorenzo respectively, give Ash sounding boards he didn’t have in previous incarnations. The dynamic works well. The team is further enhanced when Amanda, played by Jill Marie Jones, joins the trio. All three actors keep up with veteran Deadite destroyer Campbell and it is a lot of fun to watch.

Not having read much about the series before watching it, I was thrilled to see the queen of badassery Lucy Lawless appear as regular character Ruby Knowby. I don’t want to give too much away but let me say that Lawless kicks so much butt in Ash vs Evil Dead. So. much.

While Ash vs Evil Dead is a comedy, it is worth noting that it is a horror comedy. While it is hilarious, it is not for the faint of heart. There are some great jump scares, some brilliant gory scenes, and most of the actors spend most of their screen time covered in all kinds of blood. The amount of blood in Ash vs Evil Dead rivals Evil Dead 2 which of course brought us this classic scene.

I can’t stress enough how much I enjoyed Ash vs Evil Dead. While I wouldn’t recommend watching it without having seen the original trilogy, I absolutely recommend spending a Saturday catching up with the Evil Dead. Just make sure no Deadites catch up with you too!

“Wow. Last time I was here with a girl I was hoping to get laid. Didn’t quite work out that way. I did cut my own hand off with a chainsaw though. Was a fun weekend.”