Hurricane Bianca: From Russia with Hate (2018) 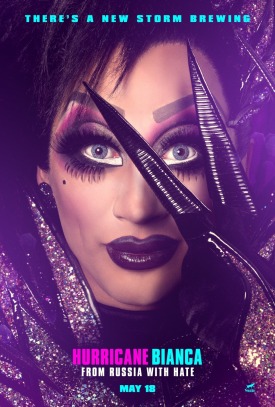 Watch this if you liked:
Hurricane Bianca, Austin Powers 2: The Spy Who Shagged Me, Horrible Bosses 2

After getting his job back as his male self, high school teacher Richard (Haylock) is living a life free of his alter ego Bianca Del Rio. That is until his homophobic nemesis Deborah (Dratch) creates a fake award that Bianca must attend to collect in Russia, where homosexuals and transvestites are locked up and tortured.

Roy Haylock’s Bianca Del Rio is back with a vengeance in this comedy that addresses real social issues in a light-hearted way.

There are so many fantastic cameos in Hurricane Bianca: From Russia with Hate but my absolute favourite is Alaska’s cameo. I could see the joke coming but it was so well executed that it remains the stand out “ermahgerd” moment for me.

I did miss Willam as Roy and Stephen’s friend Bailey. He added some sassy punch to the trio that was lacking with new third wheel Rex.

The overall plot to Hurricane Bianca: From Russia with Hate is as fun as it is ludacris. The comedy sways easily between sassy and smutty.

If you enjoyed Hurricane Bianca then the sequel is a must see. I would recommend that if you’re considering watching Hurricane Bianca: From Russia with Hate, you spend an extra hour and a half watching its predecessor first though as together they make a hell of a comedy double feature.

“Bianca is upstairs in the closet where she belongs.”