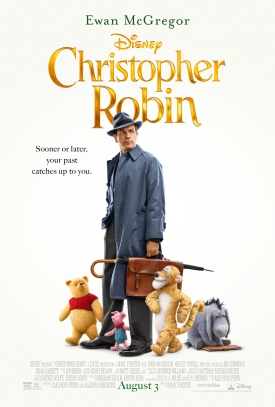 Watch this if you liked:
Winnie the Pooh, Paddington, Hook

Christopher Robin (McGregor) has grown up, married, had a daughter and completely forgotten the ways of his friends in the Hundred Acre Woods. Now a workaholic, Christopher is at risk of losing his family and his sanity when a visit from a silly old bear in need sends his world into a spin.

I grew up with The New Adventures of Winnie the Pooh on Saturday Morning Disney and, while it wasn’t my favourite cartoon, I always enjoyed the show when I could join Pooh Bear and his friends on their adventures. Christopher Robin is not as much silly fun but is more poignant and still thoroughly entertaining.

Having Jim Cummings reprise his roles as Pooh and Tigger is perfect. Jim Cummings is the voice of Pooh Bear and his bouncy buddy for an entire generation and, as far as I’m concerned, no one else should ever be allowed to do either.

Brad Garrett’s portrayal of Eeyore is so much fun and very reminiscent of Eeyore in The New Adventures of Winnie the Pooh. Ewan McGregor does a great job of portraying the world wearied adult Christopher Robin.

The residents of the Hundred Acre Woods are all beautifully animated to look as realistic as talking teddies and animals can.

The story Christopher Robin tells is magical and delightful, but it is also an emotional roller coaster with heartbreaking moments, unadulterated joy and silly humour. It does seem to be quite an adult Disney movie in the same way that Cinderella (2015) was more adult than it’s animated counterpart. The kids will love the adorable CGI companions, but grown ups can still enjoy a beautifully assembled story.

I think everyone could use a little bit of magic, joy and silly old bear in their lives so I would recommend everyone take a couple of hours to enjoy the latest masterpiece from the House of Mouse.

“People say nothing is impossible, but I do nothing every day.”