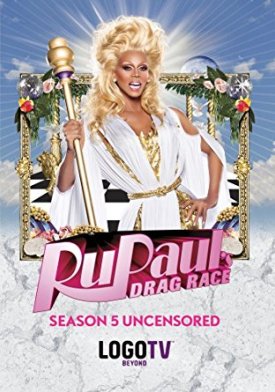 Fourteen more drag queens compete in a variety of challenges to become RuPaul’s next drag superstar and bring home a massive prize pool including $100,000.

Season five of RuPaul’s Drag Race is, as can be expected, filled with fun challenges, beautiful drag queens, and so much shade.

The fifth season is also, at this stage, one of the most tumultuous seasons in terms of casting, which was quite distracting from the art itself. There has always been conflict and likely always will be when you put strong personalities in competition with each other. However, this season cast two former friends and now enemies together. I know … Manufactured drama on reality television — who would have guessed?! But in this particular case the drama between our two queens was distracting and quickly became tiresome.

One of my favourite things about RuPaul’s Drag Race, aside from the gorgeous costumes, fierce make up and wicked one-liners, is the appearances from special guests including past contestants. This season has plenty of both and definitely makes it worthwhile to ensure you watch the seasons in order.

I highly recommend RuPaul’s Drag Race for anyone who loves competition shows based around art, fashion and performance. The cast in season five is incredibly polarising, but that only makes the viewer invest themselves further in the outcome.

“I am Seattle’s premier Jewish narcoleptic drag queen. Thank you!”