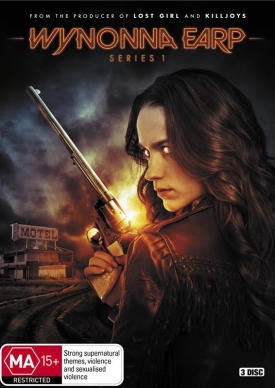 The town of Purgatory is home to the cursed Earp family. After her great-great-grandfather Wyatt was cursed by a demon, it falls to Wynonna Earp (Scrofano) as his eldest living ancestor to break the curse by using Wyatt’s gun Peacemaker to send the 77 risen people he killed with it back to hell.

The heirs before her have all failed, but none of them had what Wynonna does — friends willing to help no matter the cost and an attitude that just won’t quit.

Wynonna Earp gets off to a shaky start with a pilot full of stilted dialogue, forced acting and dubious pacing. The show quickly finds its feet though and by the time the second episode ended, I was hooked.

The titular character in Wynonna Earp is a really enjoyable character. She is deeply flawed and has a very troubled history but she is also sharp, witty, strong and courageous. Scrofano does a brilliant job of bringing the character to life.

Season 1 of Wynonna Earp has an overarching storyline with a ‘bad guy of the week’ mystery format. This works well with the character setup and the general feel of the show, with each defeated bad guy bringing Wynonna and her team a step or two closer to their ultimate goal. The humour in Wynonna Earp often lightens what is an otherwise very dark show and gives the characters an extra layer of likeability.

If you enjoy supernatural horror shows like Supernatural or Grimm then Wynonna Earp should be right up your alley. I’m looking forward to going back to the source material and reading the comics of the same name on which Wynonna Earp is based.

“I do not recall what lie I told you, I was probably drunk.”
“It was 8am.”
“I was definitely drunk.”