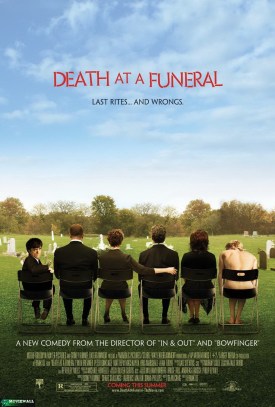 Watch this if you liked:
Shaun of the Dead, A Fish Called Wanda, Love Actually

At their father’s funeral, Daniel (Macfadyen) and Robert (Graves) are approached by Peter (Dinklage) who claims to be their father’s lover and blackmails them for £15,000. Meanwhile their cousin Martha’s (Donovan) fiancé Simon (Tudyk) has inadvertently been given hallucinogens by her brother Troy (Marshall), Martha is pursued by another man (Bremner) and Howard (Nyman) worries about a rash. It’s a funeral that none of them will soon forget.

Wrangling a family gathering has never been so inappropriate … and entertaining.

From the opening credits, which show a cartoon coffin en route over a map and accompanied by Beetlejuice-esque music, to the end credits that show bloopers accompanied by upbeat music, Death at a Funeral is quite enjoyable.

The main cast in Death at a Funeral are all fantastic in their roles. Particular praise to Peter Dinklage, Matthew Macfadyen and Alan Tudyk.

Peter Dinklage has the remarkable ability to portray so much without needing to use dialogue, it is often transfixing to watch. Though he only features in a handful of scenes, he steals each one.

Matthew Macfadyen plays the role of family wrangler well and is the perfect straight guy but also often quite ludicrous himself. It’s the perfect mix of how you would imagine someone reacting to the circumstances.

I can’t think of anything I have seen Alan Tudyk in and didn’t think he did a bang up job. His portrayal of the straight-laced Simon who is accidentally given a homemade concoction of drugs is one of the comedic highlights of the film.

“Justin, it was one night. It was a massive mistake. I was drunk out of my mind. You could have been a donkey!”