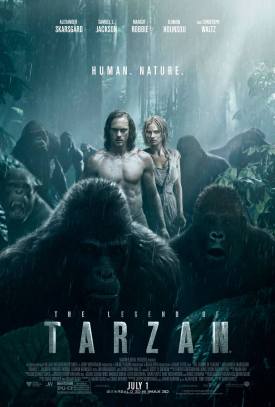 Watch this if you liked:
Kong: Skull Island, Godzilla, Tarzan (1999), The Jungle Book

Eight years after rejoining London society John Clayton AKA Tarzan (Skarsgård) and Jane (Robbie) are asked to go back to Africa on a diplomatic mission with George Washington Williams (Jackson). When the mission turns out to be a trap to deliver Tarzan to an old enemy, the trio must rally with old friends to protect themselves and thousands of innocent humans and animals.

The Legend of Tarzan is a decent quality action film that shows a different angle of one of cinemas most adapted characters. Instead of focusing on the initial meeting between Tarzan and Jane, The Legend of Tarzan shows us a Tarzan, or John Clayton in this case, who has married his Jane and is living in the lap of London luxury. When John Clayton returns to Africa, it gives an interesting perspective because he fits back in so well but retains the humour, British accent and clothing (for the most part) of a Londoner. The preceding story of his life is intwined throughout the story well via flashbacks and dialogue.

With high quality actors Skarsgård, Robbie, Jackson and Waltz leading the talented The Legend of Tarzan cast, the performances are quite good. The banter between Skarsgård and Jackson is well delivered and often hilarious. Robbie delivers a great portrayal of a damsel who refuses to be in distress. Waltz does what he does best and gives a great performance of his archetypical affable but evil villain.

The CGI creatures in The Legend of Tarzan are beautiful and convincing enough most of the time. There are only a few times when the general special effects bomb but when they do it’s noticeable. Though overall not too much is lost as a result of the technical hiccups.

The Legend of Tarzan is an enjoyable action flick with a good cast, fun dialogue and some great battles. I don’t feel that it’s a film that has much rewatchability, but it’s worth a look if you enjoy the story of Tarzan or adventure films that don’t require a lot of thinking.

“They are singing the legend of Tarzan. For many moons he was thought to be an evil spirit – a ghost in the trees. They speak of his power over the animals of the jungle. Because his spirit came from them. He understood them. And learned to be as one with them.”