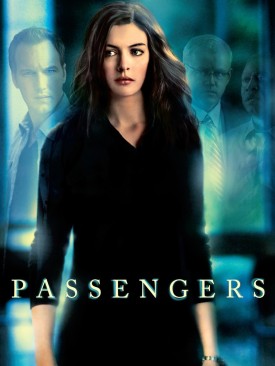 Other notable appearances:
William B. Davis

Watch this if you liked:
M. Night Shyamalan films

When therapist Claire (Hathaway) starts group therapy sessions for several survivors of the same plane crash, she starts to notice her patients have differing stories, are being followed, or are disappearing. Is it a cover-up by the airline or is it something far worse?

I was perusing the thriller section of Netflix when I happened across Passengers. I thought the concept was interesting and generally love Anne Hathaway’s performances, so I gave it a go. While it has no real effect on the enjoyment of the film, I feel it is worth noting that IMDb lists Passengers as a drama/mystery/romance. I feel these classifications suit the film a lot more than the supernatural thriller section in which I found it.

I won’t say that the decision to watch Passengers was a mistake but it was a pretty average experience. The plot twist has been famously done before and was therefore predictable. The ending was underwhelming. The rest of the plot was mediocre at best.

With a cast featuring Anne Hathaway, Patrick Wilson, David Morse and Andre Braugher, I expected a lot more outstanding performances. That’s not to say the actors did not play their roles well — they all did. It just felt like the film didn’t let any of them reach their full potential.

The main characters Claire and Eric were both likeable and had considerable depth given the circumstances. Though comparatively most of the other characters in Passengers are only shadow puppets to enhance the mystery. We are generally not shown anything more than the veneer until they are about to disappear.

I found Passengers to be moderately entertaining but overall a forgettable film despite having a great cast. If you want to watch a mystery or drama film with a great twist ending, I would recommend Unbreakable or Primal Fear instead.

“What is scary about commitment is that your life becomes real. It is not a plan, it is not what you had hoped for, it is real.”