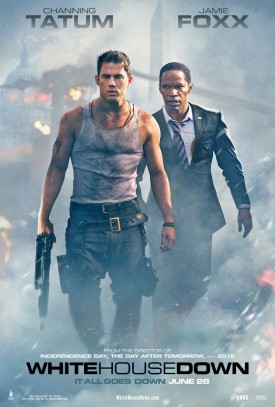 Former soldier John Cale (Tatum) dreams of becoming a Secret Service Agent to protect his daughter’s idol President James Sawyer (Foxx). When those dreams are dashed by Special Agent Carol Finnerty (Gyllenhaal), Cale takes his daughter on a tour of the White House.

A team of terrorists take over the White House and take the President hostage. However not all is as it seems. Can John Cale save his daughter (King), the President and the future of the United States in one afternoon?

White House Down was the second film to be released in 2013 with terrorists invading the White House to capture the President. While White House Down and Olympus Has Fallen sound like the same film, they both approach the subject in very different ways.

One main difference is that White House Down manages to nail more of the humorous wisecracks associated with explosion-ridden action films. As a result it comes across as a much lighter film than its counterpart.

The cast all give decent portrayals of their characters. Ultimately though most people won’t be watching an action movie for Oscar winning performances.

There are plenty of explosions, an interesting plot, a (somewhat predictable) twist in the tale and a car chase on the front lawn of the White House. With all of these things and more, White House Down doesn’t cross a lot of new ground in the action genre but it is an enjoyable couple of hours nonetheless.

“As the President of the United States, this comes with the full weight, power and authority of my office. Fuck you.”