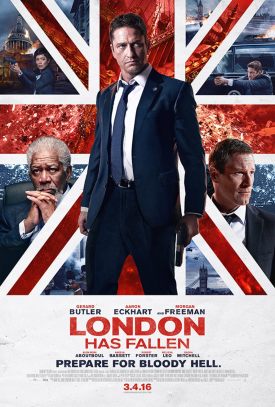 Watch this if you liked:
Die Hard, Olympus Has Fallen, Air Force One

When the British Prime Minister dies in his sleep, the leaders of the United States, France, Japan, Italy Canada and Germany are called to London for his state funeral.

The funeral is touted as being the safest event on the planet and yet an arms dealer/terrorist leader out for revenge manages to turn it into a bloodbath.

It is up to Secret Service agent Mike Banning (Butler) and US President Benjamin Asher (Eckhart) to once again save the day and not be killed respectively.

London Has Fallen is true to its predecessor in that it has a little bit of backstory and then “BOOM! POW! BANG!” everything kicks into high gear. I grew up watching Stallone, JCVD and Seagal. As a result, I do enjoy films that have over-the-top action, wisecracking one-liners and enemies that drop like flies to a lone hero. London Has Fallen did not disappoint in these regards.

Banning is the atypical action hero who goes through most of the film without so much as a hangnail. The one gunshot wound he suffers, he walks off with less fuss than I cause when I stub my toe. Some viewers might be bored by these idealised heroic figures and that’s fine. Personally though, I feel they are pivotal to this type of over-the-top action film. If I wanted realism then I would watch a realistic film.

London Has Fallen is not a film to watch if you want to think too much about it, if you worry about whether a gun could actually hold that many bullets, or if you generally don’t like bad language and action movies. If you enjoy modern action movies grounded in the classics of the late 20th century, then this is an enjoyable 99 minutes of film.

“Stay in this room and wait for me to come back.”
“And if you don’t come back?”
“Then you’re fucked.”