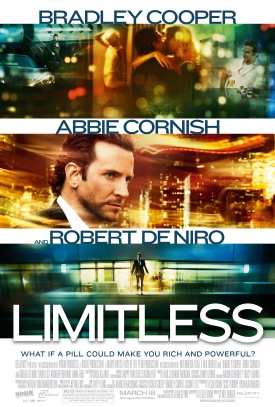 Watch this if you liked:
Source Code, Lucy

Edward Morra (Cooper) is a struggling writer who has just been dumped and is about to be evicted. It’s at this point that a chance encounter with his ex-brother-in-law Vernon (Whitworth) introduces him to NZT, a new drug that enhances cognitive abilities.

The drug helps Edward to meet the deadline for his book deal so he heads back to Vernon for another dose. When he finds Vernon murdered, he takes the entire NZT stash. With the drug he unlocks abilities and opportunities of which he had never dreamed. Eventually though Edward must wonder if Vernon’s death could become his own fate.

I remember when Limitless came out in cinemas and it was something that I wanted to see. Somehow I missed its cinematic release and it has taken me five years to catch up. I’m I glad I finally did!

Limitless is an entertaining thriller with a good plot. The formula is cliche in some regards. Good guy has thing, bad guy wants thing, good guy doesn’t want bad guy to have thing. Fights, chases and betrayals ensue. It is a good formula.

One of the things I really loved about the film is how visually stunning it is. When the focus character in the scene is not on NZT, the atmosphere is flat and even gritty. When the focus character is under the effects of the drug, the contrast is set to 11 and everything looks vibrant. Alive. It steps Limitless up a notch in a way that seems very simple as a viewer but is a stroke of genius from the filmmakers.

Bradley Cooper gives a great performance as both hopeless, shy writer Edward Morra and successful, cocky millionaire Edward Morra. The character undergoes a range of emotions, experiences and effects. Cooper portrays them all with skill and flair.

I was hooked on Limitless from the opening scene. From there, the solid cast and good story kept me interested and engaged throughout. I would definitely recommend Limitless to fans of thrillers.

“For a guy with a four digit IQ, I must have missed something. And I hadn’t missed much. I’d come this close to having an impact on the world. And now the only thing I’d have an impact on was the sidewalk.”