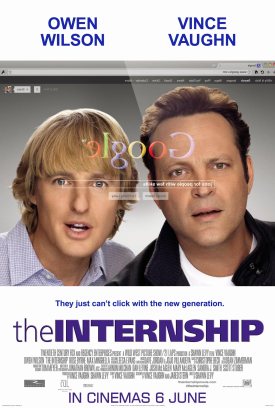 Watch this if you liked:
Wedding Crashers, Dodge Ball, most other comedy movies featuring members of the Frat Pack

Nick (Wilson) and Billy (Vaughn) are salesmen who suddenly find themselves unemployed. With the market for salespeople having dried up, they entertain the idea of an internship at Google.

When they are grouped with the misfits that no-one else chose, Nick and Billy must use their real world experience to bring their team together. But will their experience help their team beat the competition and score the ultimate jobs at Google or will they be left out of the final results?

Most comedy movies follow a formula that works. Even more formulaic are comedy movies featuring stars from the ‘Frat Pack’. The Internship is no different. Within the first twenty minutes, I had predicted several of the key plot points. Did this make The Internship less enjoyable? Not by much, though it did make some parts feel tedious.

The story of two middle-aged men interning at one of the most technologically advanced companies on the planet was what hooked me into watching The Internship. I felt that the story was fun and quirky despite having predictability oozing out of every scene. Honestly, who hasn’t looked at the stairs in their office building and thought how much fun it would be to have a slide for descending. No? Just me?

Owen Wilson and Vince Vaughn are fun to watch play off each other. However, there are times where their loud and obnoxious behaviour can become grating. Thankfully there are only a few of these moments in The Internship.

The only aspect to The Internship that annoyed me: This is the second movie in which an explanation for Rose Byrne’s accent has felt forced. There could be more, but I have only seen her in three movies (Troy, Bad Neighbours and The Internship). I can’t think of a single movie where Sam Worthington’s blatantly Australian accent has had to be explained. But then Rose Byrne is a lady so it adds to her sex appeal and makes her seem exotic, right? Whoops, my snark is showing.

If you’re looking to chill in front of a silly comedy movie that doesn’t require a lot of thought (except for paying attention to Owen Wilson and Vince Vaughn whentheytalkreallyfasttoshowhowsynchronisedtheyare) then check out The Internship.