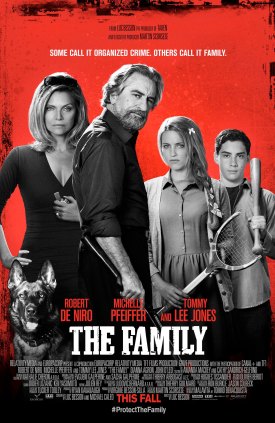 The Manzoni family has been relocated to Normandy under the witness protection program. The family had strong mafia connections in Brooklyn and ‘snitched’ on the rest of their mafia clan.

The family has trouble acclimating to the town without resorting to assault, extortion, or general mayhem to solve everyday dilemmas. But when the mob storms Normandy, the family must use every trick they know to save themselves and each other.

The Family is a fun mob-comedy with an all-star cast. As far as laughs go, The Family is average. However, the story is engaging and different from anything I have seen before. The laughs The Family does deliver are belly laughs so it does make up comedy ground in that respect.

Seeing Glee’s Dianna Agron as the borderline psychotic daughter, was an interesting change of pace.  Yes, I watched the first season of Glee and enjoyed it until they all started partner swapping like some kind of high school swingers party.

Tommy Lee Jones is one of my favourite actors to see in comedic roles. His dry deliveries, tough guy exterior, and expressive-in-its-expressionlessness face — it WORKS! Jones’ role as FBI handler for the Manzoni’s is no different and equally as effective.

If you’re looking for a silly comedy featuring mobster stereotypes and one of the most recognisable Hollywood mob-movie actors then The Family will keep you entertained for just under a couple of hours.

‘Your family is the incarnation of evil, and your life is a never-ending pact with the devil! Leave this holy place, for the love of God!’