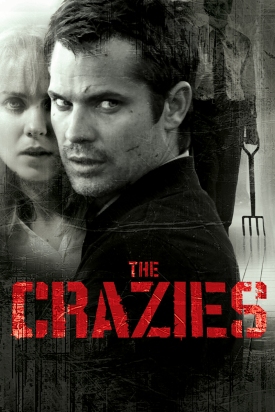 Watch this if you liked:
Dawn of the Dead, Dreamcatcher, The Thing

David Dutten (Olyphant) is the sheriff for Pierce County when a virus begins to spread that causes the affected citizens to become violent psychopaths. When the military arrive to contain the infection and relocate the uninfected, David’s wife Judy (Mitchell) is flagged as a threat and apprehended due to a pregnancy induced fever. David returns to the quarantine area with his deputy Russ (Anderson) to rescue Judy and her assistant Becca (Panabaker) who has also been wrongly detained. The four survivors must find a way out of their town through a military with orders to kill first, ask questions later; infected citizens in  psychopathic frenzies; and their own paranoia.

The Crazies was a pretty average horror flick. It wasn’t terrible, but it wasn’t fantastic either.

As far as stories go it was enough to keep this reviewer interested until the end, but it felt like a very long movie. The Crazies sticks close enough to cliche horror tactics and plot formulas that it was quite predictable. This ended up detracting significantly from the fright factor.

There was really not much that was remarkable about The Crazies. There was nothing that I can tell you “that was amazing and I loved that thing”, but I also can’t pinpoint anything that would tell you “holy cow, that thing sucked so much and I hate it”. The Crazies was, for this reviewer at least, a bit of a non-event.

I would recommend if you’re looking for an average horror movie that you don’t have to think too much about and The Crazies is on television then check it out, otherwise I wouldn’t go out of your way to watch it.