Top Ten Movies I Watched at the Cinemas in 2013

I feel like I really dropped the ball when it came to cinema viewings this year. Generally, I aim to see at least one movie at the cinema every fortnight, but managed to see only 16 in 2013. Regardless, below is my opinion on the best movies I watched this year along with a list of the ones that didn’t quite make the cut.

Criteria: Must be a movie I watched at the cinemas in 2013.

10. Carrie
Carrie White (Chloë Grace Moretz) is the shy daughter of religious zealot Margaret White (Julianne Moore). Upon getting her first period in her high school’s showers, Carrie believes she is bleeding to death and hysterically seeks help from her classmates. To say the teenage girls are unsympathetic is a gross understatement as they pelt her with sanitary products and scream abuse. One of the girls, Sue Snell (Gabriella Wilde), feels guilty for the way she and her friends treated Carrie, so she asks her boyfriend to take Carrie to the prom and give her a wonderful night she’ll never forget. What Sue doesn’t know though is that one of the other girls is planning a cruel trick and with Carrie’s emerging telekinesis, it’ll be a prom night none of them will forget … Well, those who survive.

As a remake of the original 1976 Carrie, I liked this movie a lot. However, it ranks at 10 because I was disappointed they stuck to remaking the first movie (this year’s Carrie is the third movie adaptation) didn’t try to adapt more closely to the Stephen King novel source material.

9. Iron Man 3
While he recovers psychologically from the events that took place in The Avengers (2012), Tony Stark (Robert Downey Jnr) is faced with the task of defeating a terrorist who calls himself the Mandarin.

I love Iron Man, he’s my favourite Marvel hero tied with Gambit. This movie was incredibly enjoyable, however it ranks fairly low on the list because it felt overly long and a lot less engaging than its two [three if you count The Avengers] predecessors. Overall though it was a great movie and the actors all performed well.

8. We’re the Millers
David Clark (Jason Sudeikis) is a small time drug dealer who, thanks to being robbed, owes his boss a lot of money that he doesn’t have. As it happens, his boss has a “smidge” of marijuana he needs shipped into the US from Mexico. He gives David the task of moving the shipment to make up for the money he owes. To appear less conspicuous, David puts together the “Millers”, a fake family he plans on travelling with comprised of stripper Rose (Jennifer Aniston), dweeby virgin Kenny (Will Poulter) and sassy runaway Casey (Emma Roberts).

This is one of the two funniest movies I have seen this year. It’s ridiculous, it’s reasonably predictable, but every actor plays their role very well and the script was decent for a comedy flick. I saw Grown Ups 2 not long after and couldn’t say a single one of those things about it. For more read my Movie Review – We’re the Millers (2013).

We’re the Millers on IMDb.

7. The Wolverine
The movie begins in the final stages of World War II during the atomic bombing of Nagasaki. Logan (Hugh Jackman) uses his mutant healing abilities to shield one of his captors, Yashida (Haruhiko Yamanouchi), and survive the blast himself. Decades later in the present day, the dying Yashida sends mutant Yukio (Rila Fukushima) to find Logan and bring him to Tokyo so that he may thank the man who saved his life. Upon arriving Logan is offered a chance to relinquish his immortality to Yashida, as Yashida is not ready to die and Logan has come to see his mutant abilities as a curse. Logan refuses and Yashida dies. At the memorial, Yashida’s granddaughter Mariko (Tao Okamoto) is the target of a kidnapping attempt by the Yakuza. She is saved by Logan and Yukio, but during the fight Logan realises his healing abilities have gone. Time quickly begins to run out for Logan and Yukio to find out who is targeting Mariko and why.

I’ve mentioned in a previous list that I used to really dislike Wolverine. I think this film [and less so, X-Men Origins: Wolverine] was a major factor in turning that around and he is now one of my favourite Marvel heroes. The X-Men series has managed to redeem itself quite nicely since the debacle that was The Last Stand.

The Wolverine on IMDb.

6. The World’s End
Since high school ended, Gary King (Simon Pegg) has quite literally been living the high life. During a rehabilitation session, he is made to realise that not finishing the Golden Mile pub crawl before leaving his hometown has left him missing something. With this realisation in tow, he rounds up his estranged friends Andy Knightley (Nick Frost), Steven Prince (Paddy Considine), Peter Page (Eddie Marsan) and Oliver “O-Man” Chamberlain (Martin Freeman) to once again attempt reaching The World’s End Tavern, the last of 12 pubs on the Golden Mile. During the pub crawl, they realise their home town has been overrun by robot impostors of the town’s residents. It falls on the five drunk friends and Oliver’s sister Sam (Rosamund Pike) to save their hometown and, potentially, the world.

This was the best comedy movie I watched this year. It’s very difficult to not enjoy the combination of Simon Pegg and Nick Frost, especially when joined by Edgar Wright. For more read my Movie Review – The World’s End (2013).

The World’s End on IMDb.

5. Thor: The Dark World
After the events that took place in The Avengers (2012), Thor must rejoin Jane to save Earth, Asgard and the whole non realms from the vengeful Malekith and his Dark Elves.

Thor: The Dark World is the second best superhero movie and the best Marvel movie I have seen this year. I always feel the second instalments in superhero movies are the best, primarily because you don’t need to go through all the back story you need in the first.

Thor: The Dark World on IMDb.

4. The Conjuring
Based on the true accounts of paranormal investigators Lorraine and Ed Warren (Vera Farmiga and Patrick Wilson), The Conjuring tells the story of the Perron family. Caroline and Roger Perron (Lili Taylor and Ron Livingston) move into a new home with their five daughters. What they don’t realise is that the house is already occupied and the current tenants want to share a lot more than just living quarters.

This movie is one of the best horror movies I’ve seen in a very long time. It builds suspense and tension with scares in just the right places. The only drawback I found was the “based on a true story” aspect, which to me always seems to make a movie slightly more predictable. All in all though, I thoroughly enjoyed this movie.

The Conjuring on IMDb.

3. Man of Steel
Baby Kal-El is once again evacuated from a dying Krypton and General Zod (Michael Shannon) is banished to the Phantom Zone with his followers. They are freed with the destruction of Krypton and dedicate their lives to hunting Jor-El’s only son. Kal-El is adopted by Martha and Jonathan Kent (Diane Lane and Kevin Costner) and grows up as Clark Kent (Henry Cavill). Clark soon begins to develop his Kryptonian abilities and faces General Zod with some unexpected help.

This is probably my favourite Superman movie of all time. It has even managed to knock the first Christopher Reeve one from the top spot. I had my doubts about Amy Adams as Lois Lane, but she performed admirably as did Henry Cavill as Superman. Without a doubt the best superhero movie of the year.

Man of Steel on IMDb.

2. American Hustle
The film begins by declaring that “some of this actually happened” then proceeds to tell a story of two hustlers Irving Rosenfield (Christian Bale) and Sydney Prosser (Amy Adams). When they are caught by FBI agent Richard DiMaso (Bradley Cooper), the pair are offered a deal that will set them both free if they help DiMaso capture another four criminals. Originally the trio target small time crooks and con-men, but the stakes rise drastically as DiMaso starts going after more high profile marks in order to make a name for himself.

American Hustle was the last movie I watched for 2013 and is one of the few movies I have ever seen that I can say was almost perfect in every way. The cast, the dialogue, the humour, the soundtrack and even the cinematography that makes you feel like you’re watching an old classic. The only small concern that I see with this movie is that it was a very long movie. At 2 hours and 18 minutes (138 minutes) it’s not Gone with the Wind long, but it is a considerable amount of time. However, while it is a long movie, it is a thoroughly entertaining one that should still manage to keep you engaged throughout the duration. 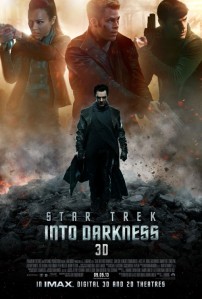 The crew of the Enterprise, led by Captain James T. Kirk (Chris Pine), is faced with travelling into Klingon space to capture a terrorist by the name of John Harrison (Benedict Cumberbatch) who has declared a war on Starfleet.

I had been waiting for this movie for a long time and, although I tried to avoid the hype and rumours, I was beyond excited to see the latest instalment of the Star Trek franchise. J.J. Abrams did not disappoint me.* The second movie in the reboot series thrilled me from beginning to end. As a longtime Star Trek fan, I knew well before he uttered his name that the main villain was really Khan, but hearing the revelation from Benedict Cumberbatch was music to my nerdy little ears. I could gush and fangirl out about this movie for a lot longer than would probably be necessary, but suffice to say this movie was absolutely the highlight of my cinematic visits in 2013.

The only issue I have with the movie is a minor one and goes back to the original casting of Star Trek (2009). I feel that the casting was [mostly] impeccable, [almost] every cast member has managed to reimagine their character, but still stay true to the original portrayal. Everyone that is, except Zoe Saldana. I personally feel her portrayal of Uhura is wooden and two-dimensional at best. However, that is a minor disappointment in an otherwise phenomenal movie and, as mentioned earlier, is goes back as more an issue with the reboot franchise as a whole than STID as a movie.

* I know a lot of fans were disappointed with the movie and especially the revisitation of Khan that is often similar to Star Trek II: The Wrath of Khan, but I wasn’t.

Star Trek Into Darkness on IMDb.

The Ones That Didn’t Make the List:
Despicable Me 2
Epic
Grown Ups 2 [If I had enough movies to do a “worst of” list, this would be number 1]
Jackass Presents Bad Grandpa
Oz the Great and Powerful
Sharknado